Be Prepared For The Toughest Questions

1) A bank holds the mortgage on a motel which the motel owner says has an average daily revenue of at least $2048. In the event the average is not at least $2048, the bank will ask the motel owner for additional collateral for the loan as protection against loan default. A loan officer is aware that the daily average revenue is normally distributed and randomly selects 40 days during the last six months. The sample has a mean of $2003 and standard deviation of $144.00. (Assume a= 0.05).

b) What is the value of the test statistic?

c) Plot your test distribution and clearly identify the rejection and the p-value areas (with two different colours).

d) Is the bank loan financially sound (should the bank ask for additional collateral)?

2) It has been reported that the average visitor from Japan spent $3120 during a trip to the Canada, while the average for a visitor from the United Kingdom was $2654. Using the data provided below, use α=0.05 level, examine whether the sample mean for Japanese visitors is significantly higher than that for visitors from the United Kingdom. Show your steps how did you arrive at the p-value for the test and how do you interpret it.

3) A battery manufacturer claims that their new “long-lasting” battery has an average life that is significantly longer than their competitor’s “regular” battery. Both types of batteries were tested and the number of hours each battery lasted is shown in the following table.

a) State the null and alternative hypothesis.

b) Using a= 0.05, state the decision rule in terms of the critical value.

Now, assume that from the production perspective we are interested in testing if the reliability of the production of “long- lasting” battery is significantly better than the “regular” battery.

e) Using a= 0.01, state the decision rule in terms of the critical value. 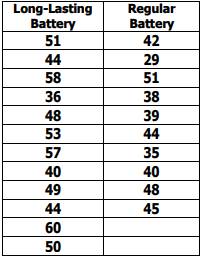 4) Suppose that in an attempt to target its clientele, managers of a local supermarket chain want to determine the difference between the proportion of morning shoppers who are men and the proportion of after–6 p.m-shoppers who are men. Over a period of two weeks, the chain's researchers conduct a systematic random sample survey of 400 morning shoppers, which reveals that 352 are women and 48 are men. During this same period, a systematic random sample of 480 after–6 p.m. shoppers reveals that 293 are women and 187 are men. Construct a 98.5% confidence interval to estimate the difference in the population proportions of men. Carefully interpret the outcomes.

5) Twenty-five recorded food delivery times to the same points of delivery in the same city for two local delivery food companies have been provided below. Do the data indicate a difference in mean delivery times for the two companies? Use a 0.01 level of significance and you are only allowed to construct a confidence interval.

6) Social networking is becoming more and more popular around the world. Pew Research Center used a survey of adults in several countries to determine the percentage of adults who use social networking sites (USA Today, February 8, 2012). Assume that the results for surveys in Great Britain, Israel, Russia, and United States are as follows.

a) Conduct a hypothesis test to determine whether the proportion of adults using social networking sites is equal for all four countries. What is the p-value? Using a 0.05 level of significance, what is your conclusion?

b) What are the sample proportions for each of the four countries? Which country has the largest proportion of adults using social networking sites?

c) Using a 0.05 level of significance, conduct multiple pairwise comparison tests among the four countries. What is your conclusion?

7) The five most popular art museums in the world are Musée du Louvre, the Metropolitan Museum of Art, British Museum, National Gallery, and Tate Modern (The Art Newspaper, April 2012). Which of these five museums would visitors most frequently rate as spectacular? Samples of recent visitors of each of these museums were taken, and the results of these samples follow.

a) Use the sample data to calculate the point estimate of the population proportion of visitors who rated each of these museums as spectacular.

b) Conduct a hypothesis test to determine if the population proportion of visitors who rated the museum as spectacular is equal for these five museums. Using a .05 level of significance, what is the p-value and what is your conclusion?

Hint
StatisticsA mortgage is a loan that an individual or an institution borrows from a financial institution to maintain a home, business, or real estate and agrees to pay back after an agreed time. The loan is mostly paid with interest that the financial institution sees fit. There are various types of mortgages namely fixed-rate mortgages, interest-only mortgages, FHA loans, Jumbo, etc. These loans ...

A quality expert with the ability to solve your project will be assigned.

Check order history for updates. An email as a notification will be sent.

Unable to find what you’re looking for?

A mortgage is a loan that an individual or an institution borrows from a financial institution to maintain a home, business, or real estate and agrees to pay back after an agreed time. The loan is mostly paid with interest that the financial institution sees fit. There are various types of mortgages namely fixed-rate mortgages, interest-only mortgages, FHA loans, Jumbo, etc. These loans are helpful in that they prevent the failure of homes and businesses.